← Acceptance or Rejection – Which do You Prefer?
Weekly Writing Memo: Where’s the Story? →

Chronology is full of surprises 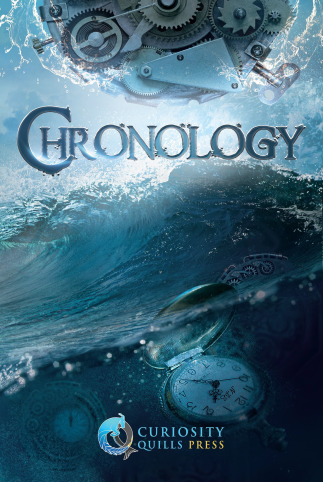 I’ve just had the pleasure of reviewing a new anthology of short fiction put out by Curiosity Quills Press. When asked if I’d like to review Chronology, I had the impression that it was a steampunk anthology, which is a genre I’m newly discovering. Some of the stories in this collection do have steampunk elements, such as Wind Up Hearts, the steampunk-ish romance that is sure to break readers’ hearts, by Bram Stoker Award finalist, Stan Swanson, or Flight of the Pegasus by Dr. Darin Kennedy. There’s also That Which is Hidden, a haunted steampunk-ish werewolf romance, by Julie Frost. But, I was pleasantly surprised to find the stories in Chronology to be a diverse mixture of speculative fiction.

Some are futuristic, leaning more toward science fiction, such as the apocalyptic Afterparty by Mark Woodring, Limited Liability, a futuristic outer space story by Matthew Graybosch or Gookie Visits Her Moma by G. Miki Hayden, an alternate universe science fiction story about a space bounty hunter whose current bounty takes her back to her home planet. Many others are more in the fantasy realm, such as Draconic King, by award winning author, James Wymore, or Yours Until the Ink Dries, a true faerie tale, as a young outcast girl discovers her true identity in her drawings, by Y.A. author Jordan Elizabeth. And then there are those stories that fall into the mythical realm, such as Strange Flesh, a well-crafted story of mythical creatures by Katie Young, or Wampus Cat, a tale of Appalachian legends come true by international bestselling author Scott Nicholson.

Still, others have a horror element or two, such as The Lair, a story of a cursed treasure hunt in jungle swamps, by best-selling independent author, Tony Healey, or Lava, a spectral love story by New York Times bestselling author, Piers Anthony, or In the Clutches of the Mummy Prince, by B.C. Johnson, which was not very scary. Also I had trouble relating with the main character in Johnson’s story, who wasn’t very likeable. There is also The Comeback, the weirdest zombie romance I’ve ever heard of, told from the zombie’s POV, by techno-thriller and MG fantasy author, Tara Tyler, and Inmate #85298, a chilling death row tale, by author and screenwriter, Andy Rausch.

Of course, there are also those stories that weren’t so easy to classify, including White Chapel, which sheds new light on the story of Jack the Ripper, by author, editor and podcast co-host, Andrew Buckley, or Signs Unseen, the story of a small town race war, by J.P. Moyahan, or Bait and Witch, a troublesome witch story by speculative fiction author, J.P. Sloan. There is also The Bull, by novelist and short story writer, J.R. Rain, which turns a Minotaur into a superhero, and The Unattended Life, a reminder to stop and smell the roses by J.E. Anckorn, and an intriguing airship romance, Above the Clouds, by Richard Roberts.

Yes, it is a big book, about 530 pages, but it is definitely a good read. In addition to the stories mentioned above there are the three I enjoyed the most, which I saved to tell you about in more detail. The following stories stuck out in my mind the most, but not in any particular order.

The Room Below, by novelist Wilbert Stanton is a horror story worthy of Lovecraft, or King. This story about a stay in a mental institution that puts One Flew Over the Cuckoo’s Nest to shame. It held my attention and kept me on the edge of my seat, and had a surprising, yet satisfying ending.

The Colorado King, by Nathan Yocum is a story in which survival is the name of the game as a father and daughter travel over post-apocalyptic badlands in search of kin and refuge, bringing with it some very hard lessons. This well-crafted tale grabs readers’ attention and doesn’t let go, yet it leaves readers feeling like there should be more, probably due to the fact that it is an excerpt. I’m guessing that it is from Yocum’s novel, The Zona.

And finally, Innocent Deception, by Matthew Cox is a well-crafted story which has a surprising reveal in its final pages. The daughter of a pharmaceutical company’s CEO is kidnapped and held for ransom, but the plan falls apart when the mother doesn’t want the kid back.

Overall, I give Chronology 3 Quills.

Kaye Lynne Booth does honest book reviews on Writing to be Read, and she never charges for them. Have a book you’d like reviewed? Contact Kaye at kayebooth(at)yahoo(dot)com.

3 Comments on “Chronology is full of surprises”

Leave a Reply to “Under a Brass Moon”: A Cool Collection of Steampunk and Science Fiction Stories | Writing to be Read Cancel reply