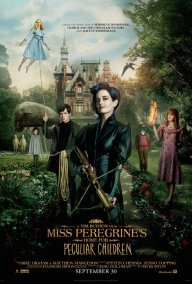 The first word that came to mind after seeing Miss Peregrine’s Home for Peculiar Children was peculiar. The movie is peculiar. I went into the film knowing next to nothing about it. I haven’t read the book, I think I may have seen a trailer at some point but don’t really remember it, and I hadn’t looked into the story at all. All I knew about the film was that it was directed by Tim Burton, it was based on a book, and it was about some kind of school for gifted kids.

I am a huge fan of fantasy films, and I love Tim Burton’s work, so I was super excited to see what this movie had in store for me. That being said, by the end of the film I couldn’t quite put my finger on how I felt about it, other than that one word I mentioned above—peculiar. The film is just peculiar. It’s beautifully shot, and the actors, especially Eva Green, do a wonderful job, but the film didn’t leave me feeling satisfied. It left me with a lot of questions, and a few complaints.

I like starting by talking about something I liked, and this film was visually beautiful. It had some great shots, and everything from the camera angles to the clothing was spot on for me. The style and artistic elements of Tim Burton’s films are always one of my favorite parts, and this film was no exception. The one thing that truly kept me hooked throughout was the visual element, and just the fact that I was enjoying looking at the film.

The other element I really liked was just the concept of the world. I loved the idea of Jake traveling through the time loops at the end, working his way back to the peculiars. I’m not sure I have a clear idea of how it would work, but I do think I got enough of a sense that it was believable. The details they gave at the end as well were just enough to create this sort of romanticized image of his journey back to the group without extending the final act unnecessarily, which was perfect.

I think the biggest downfall for me in the film was the fact that the real goal and conflict of the story took more than an hour to get to. I know because I looked at my watch when they finally started discussing Samuel L Jackson’s character and why they had to stop him. I don’t mind a long movie, and I don’t mind giving the plot time to build and unfold, but this film felt like it just took too long. Yes, the visual elements of the movie were stunning and wonderful, and it was a fascinating world to get lost in, but I wish we could have got lost in it while the plot was moving forward.

From the moment Jake first sees Samuel L Jackson’s character outside his grandfather’s house to the moment we finally learn he’s the antagonist almost an hour had passed. I usually have a good memory for details in a story, but by this point in the film I had almost forgotten that Jackson was in it and I was mostly just trying to figure out where the story was going. I feel like part of the problem that made the story seem like it was standing still was that Jake’s goal in the story initially was not to find out what happened to his grandfather, it was to see if his grandfather told the truth. The moment Jake arrives at Miss Peregrine’s we know that he was and then Jake has no real goal, no conflict. Yes, there’s still some information he can find, but he doesn’t actively seek it.

If there had been slight more focus on the thing that killed his grandfather, and more determination behind Jake’s search for answers, I think the time it took to get to the plot wouldn’t have been as bad, but it still went on too long. Getting lost in the world was great, but it felt like the plot paused for a short period of time while we got immersed in the world. Instead, entering the new world should have boosted the plot into action.

The one thing that really surprised me about this film was that there were three big plot elements that I felt were too big to have been missed. The first is a simple one—Jake’s parents. I love Chris O’Dowd, but the parents disappear from the story when they’re there at all. I guess I could buy the whole impulsive trip across the world for the story, but once they get there the dad becomes almost a burden to the plot. Instead of being a smooth element in the story, a problem Jake has to work around to get where he wants to go, it feels like the dad is forced into the story in a clunky way that makes it completely obvious that he’s supposed to be in the way of Jake’s goal. It’s never more obvious that the dad doesn’t fit in the story then at the end—he doesn’t even get a proper wrap up of his plotline! While I think Chris O’Dowd played the role beautifully, and he always makes me laugh, his character never comes back into the story at all, making it feel like the whole plotline shouldn’t have been in the movie.

The second thing that surprised me is the reveal of the twin’s powers at the end. Throughout the film I wondered about the two of them as they were the only ones to not have their powers clearly shown or mentioned (unless I missed the first mention). At the end when their masks are lifted and the woman turns to stone, it immediately made me think two things. 1. Oh, that’s cool. 2. Wait, why didn’t they just do that to Samuel L Jackson in the house when he first came into the time loop? Their powers defeat the whole movie.

If we had learned about their powers earlier and there was some kind of explanation about why they couldn’t use them all the time—such as on Jackson’s character—it would have ruined the reveal, but it would have kept the sequence of events justifiable. By not having this, we got the cool reveal of their powers at the end, but it makes all the other characters look stupid. The twins could have dropped into the pit with all the evil people and turned them all to stone. They could have done it the first time they saw Jackson. They could have followed Jake downstairs when he goes to rescue the birds and done it then. Not justifying the lack of use of their powers creates a huge plot hole.

Overall, I did enjoy Miss Peregrine’s Home for Peculiar Children despite the flaws. As I said above, visually it’s just a fun movie to watch, and seeing Eva Green embody Miss Peregrine was fabulous. She really is wonderful in the role. The plot holes and issues mentioned above are just things that made the movie go from great to just okay for me. I’ll have to watch it again at some point to see if there’s something I missed regarding the twins or the father, but overall I think the first word that came to mind when watching the movie is the right one. It really is peculiar. It’s fascinating, and alluring, and I wanted to love it, but I just couldn’t get lost in it the way I wanted to no matter how hard I tried.

One Comment on “A Peculiar Experience: Miss Peregrine’s Home for Peculiar Children”