Mark Shaw’s “The Reporter Who Knew Too Much” 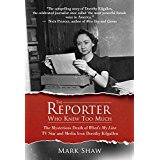 In The Reporter Who Knew Too Much, the author, Mark Shaw, takes on the role of investigative reporter, providing us with the little known facts in the story of Dorothy Kilgallen, and the circumstances surrounding her death in 1965. At the time, this determined female reporter was investigating the assassinations of John F. Kennedy and Lee Harvey Oswald, convinced that a conspiracy and cover-up was in play. Shaw has succeeded in unearthing evidence that Kilgallen’s death was not accidental, nor was it suicide, as has been alleged. In fact, there is a plethora of evidence that points to the fact that Dorothy Kilgallen was murdered, because of what she uncovered about the JFK and Oswald assassinations, the lack of proper investigation of her death part of the extensive cover-up to hide what was really going on at the time.

Dorothy Kilgallen became an icon for both women and aspiring writers, proving that family and career could be balanced and managed, even when holding down three careers at one time, something that was unheard of for the times. Her achievements offer hope to aspiring writers young and old, proving that anything can be accomplished if you want it enough and never give up. When she saw something she wanted, she reached out and grabbed a hold of it. When challenged, she dug in her heels and held tight. In a male dominated industry, she never backed down and proved she could do a better job than most of her male colleagues.

Mark Shaw does an impressive job of presenting us with her achievements and portraying her determination to win in all things she chose to embark upon. His portrayal of Dorothy Kilgallen reveals a woman who was tough and spunky, with a keen mind and sharp wit and the guts to ask the questions no one else dared to ask. Her words rendered her powerful, and although she was well loved by many, she made many enemies in her line of business, as well. As she uncovered more evidence concerning JFK’s death which supported her suspicions of conspiracy, the list of her enemies grew – enemies who were high in the U.S. governmental structure, as well as foreign foes.

Shaw chronicles the known facts of Kilgallen’s investigation up to the day of her death, and the mysterious disappearance of her investigative file, which she carried with her. That and the unexplained circumstances of her death which were only later revealed, certainly lead one to believe a full investigation was, and still is warranted. Mark Shaw approaches the investigation of Kilgallen’s death by following Kilgallen’s example and digging deep to uncover facts that have been purposely held back for fifty years. Certainly, an examination of the facts regarding Kilgallen seem to point to her murder, rather than an accidental death, and Mark Shaw thoroughly reviews the evidence pointing to all of the possible suspects including: Frank Sinatra and others Kilgallen had published unfavorable columns about; her husband Richard Kollmar; or one of the many suspects in the JFK assassination that Kilgallen’s investigation might point a finger at, high level government officials, powerful foreign government emissaries, or perhaps mobsters who had reason to silence the former U.S. leader.

Mark Shaw presents proofs that have been overlooked for lack of any investigation into Kilgallen’s death, that not only is it probable that she was murdered, but also that her investigation of the JFK and Oswald assassinations had uncovered evidence which might have changed history. Shaw points a finger at those who may not have wanted said information revealed. The Reporter Who Knew Too Much may not provide all the answers, but in it, Mark Shaw provides readers plenty of food for thought. It explores the list of suspects and an examination of motives. It goes on to investigate who had opportunity and lays out several scenarios which explain how the murder could have been pulled off by each one.

John F.Kennedy and Lee Harvey Oswald were assassinated before before I was born. Dorothy Kilgallen died before I was a year old. I have been aware of the conspiracy theories that have circulated about the death of JFK, of course, but did not known how they all came about or the true circumstances surrounding it all. Before reviewing The Reporter Who Knew Too Much, I had never heard of Dorothy Kilgallen. Mark Shaw’s investigative skill and the facts he presents here have certainly convinced me that justice has not been served and all three deaths deserve further investigation even after five decades. I give The Reporter Who Knew Too Much five quills.

Kaye Lynne Booth does honest book reviews on Writing to be Read, and she never charges for them. Have a book you’d like reviewed? Contact Kaye at kayebooth(at)yahoo(dot)com.