← “Monsterland”: Vampires and Werewolves and Zombies, Oh My!
Book Marketing – What Works?: Conclusions →

HallowErotica Anthology to be Released October 31 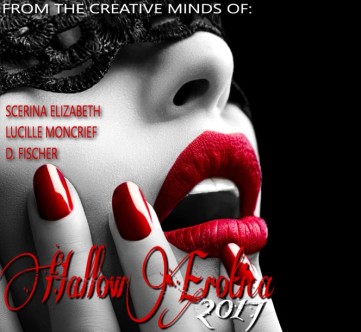 HallowErotica 2017 comes from the creative minds of Scerina Elizabeth, Lucille Moncrief, and D. Fischer.  With a release date of October 31, this collection of short Paranormal, Horror, and Erotica stories from various authors including R. Tran, Kaye Lynne Booth, and Amy Hamilton promises to give readers a Halloween they’ll never forget.

Yep. That’s my name in there. In addition to being on the FMB book blog tour, HallowErotica 2017 features my story, A Turn of the Tables. The release date is, well, Halloween of course! They’re having a big HallowErotica 2017 Release Party on Facebook starting at 6 p.m. EST, and I or my PA, DL Mullen will be entertaining you throughout the 7 p.m. EST slot, so be sure to drop by.

I’ve had the pleasure of interviewing one of the creators of HallowErotica 2017, paranormal romance author Scerina Elizabeth for one of her other tours, and I also featured an excerpt from her book, Eternally Yours: Bloodlines.

As a special treat today, I’m featuring an excerpt from my first attempt at vampire erotica. (But we’ll keep things on the blog rated ‘R’ or under). So without further ado, here’s an excerpt from A Turn of the Tables, by yours truly:

The sign on the door read Melina Dupree, M.D. – Psychiatrist. Michael straightened his lapel on his pinstriped suit, focusing on creating a mental shield before entering the office. Without it, mortals often felt ill at ease around his kind. The Elder Council wanted him to keep a low profile and had warned Michael to control his temper when he was chosen for the assignment. The council needed this mortal alive for now. Her research on how blood pathogens affect certain brain disorders had yielded information that could be quite unsettling to the entire vampire society.

Dr. Dupree had not found what she was looking for, but unwittingly, one of the pathogens she’d created had the potential to wipe out all vampires. It was unknown whether she herself, realized what her research had uncovered. Under other circumstances the Elder Council would have the research destroyed and she would be eliminated. But this mortal was surrounded by the aura of a coven of powerful witches, sworn enemies of all vampires. Her connection to the Sarenrea wasn’t clear, but Michael’s instructions were to bring her before the council without alerting the coven.

He pushed open the glass door to the office. Two large salt water fish tanks almost covered an entire wall on either side of the waiting room. Six tacky leather chairs sat in line in front of a gray metal desk. A girl, perhaps in her early twenties, with straight blond hair and too much make-up, sat behind the desk filing her nails. She looked up as he entered.

“Please tell Dr. Dupree that Michael Wymond is here to see her,” he said, meeting her gaze with an intense stare.

The girl sat up straighter, scanning her appointment book. She pushed the button on the intercom on her desk. “Dr. Dupree, your seven o’clock appointment is here.”

Michael’s gaze did not waver from the girl behind the desk. It wouldn’t do for her to be here when he took Dupree out.

The girl looked up, meeting his gaze before glancing away to stare at the intercom with a blank expression. Without saying a word, she reached under the desk, grabbing her purse and sweater, and left the office. Michael smiled at the thought of her hitting the street, realizing she had no idea where she was headed.

In the inner office, the antique furnishings appeared authentic. They included a wooden filing cabinet next to a free-standing mirror to his left, a beveled glass bookshelf lining the right wall, a Victorian-style Chaise lounge that no doubt served as the “analysis couch” next to the wall, and the oak desk, which Dr. Dupree sat behind.

The Sarenrae aura hit Michael strong, as the doctor peered over her black-framed librarian’s glasses at him, smiling. He wondered if she chose that style to make her look more intellectual. It was a look that worked, combined with her sandy blond hair pulled back in a ponytail, and her blue tailored skirt and blazer. She was the perfect picture of what a psychiatrist should be, albeit a sexy one.

Her female scent was sensual. This one had pheromones dripping off her. It stirred the maleness left within him, hardening his member as if he were still mortal. He detected the odor of fresh sex emanating from between her thighs. She’d been fucked not long ago, and still the scent of her need clung to her.

He closed his eyes, blocking his mind to those sexual thoughts, which he knew could lead nowhere. At the same time, he opened himself to her mind to see what he might learn. It was strange that he sensed no malice from her. A Sarenrae should be able to detect his true nature even with his mind shielded, but she seemed to be unaware.

When he opened his eyes, she was checking him out. Her eyes roved up and down him as she accessed the muscular man standing before her in a dark blue hoodie and black jeans. “How may I help you, Mr. Wymond?” she asked, tipping her head just a fraction to the side, her deep violet-blue eyes penetrating the depths of his stare.

Such strange eyes, meeting his gaze and holding it, drawing his eyes to hers. He’d play it cool while he probed her mind more for the answers he sought.

Her aura was strong and unmistakable, but he sensed no conscious connection with the coven. Then, a shield snapped up around her mind, like a light bulb burning out, and her thoughts were closed to him. It caught him off guard. Most mortals didn’t have strong enough minds to keep him out, but this one didn’t even seem to be aware that she’d done it.

She gazed at him with raised brow. “Then why are you here?”

With her mind shielded, subtle was out. He chose a more direct approach. “I’m a vampire,” he said with a smile, taking a seat on the leather armchair across the desk from her.

“A vampire?” She peered over her glasses at him once more, the corners of her mouth turning up ever so slightly, her brows raised over those deep blue eyes. “Of course. Is that why you request an evening appointment?” she asked.

Michael ran his hand up over the top of his head, pushing unruly black curls back from his face. Her disbelief seemed genuine. He took a deep breath, reminding himself to have patience with this mortal. He needed her, for now. “You think I’m crazy,” he said, placing his hands on the desk across from her. “You should be quaking with fear, but you’re not.”

She looked up, again meeting his gaze. “Those in my profession prefer not to label people in such manner,” she said, scribbling something on the yellow legal pad in front of her.

Each time she tipped her head as she wrote he could see her jugular pulsing in her beautifully curved neck. That, combined with the smell of her blood created a strong urge in him to jump over the desk and drink her dry, but he knew he couldn’t risk it. Perhaps when the Elder Council had finished with her… 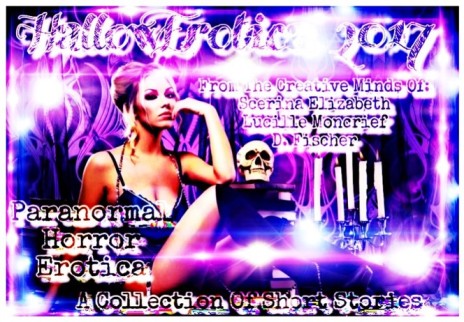 For more information on HallowErotica 2017 you can visit our official site @ https://scerinaelizabeth.wixsite.com/hallowerotica2017 or contact me via email Admin@ScerinaElizabeth.NET