← The Many Faces of Poetry: The Importance of Poets
“Brave New Multiverse”: A Short Story Collection → 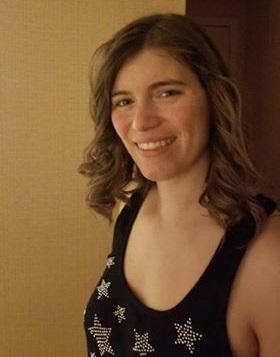 I always love to do interviews with new authors, because they get so excited. The first interview I ever did, with Dan Alatore, I was riding on the top of the world. For me, it signified that this was it and I was really a published author. Today we have an up and coming author with us, Ashley Scott, whose debute novel is a dark fantasy action thriller, Demon Anarchy. She’s here today to tell us about her book and a little about herself, as well.

Kaye: Would you share the story of your own publishing journey?

Ashley: My publishing story began with a manuscript of course. Once completed, my beta readers tore it apart piece by piece. I had to make changes before daring to pass it along to my editor, who also helped strengthen my story, Demon Anarchy, before deciding where to publish. Should I publish through a house or self publish through a website? After doing some research I decided to self publish through Amazon with assistance of a few friends who have done this process before. I love how simple it was however my next goal is to publish a book through a publishing house.

Kaye: Are you a plotter or a pantser? Why?

Ashley: I guess you could say a little bit of both. If I plot out my story chapter by chapter (I’ve tried this method before and it took me weeks, I finally accomplished beginning to end and threw all my notes out because I grew bored of the story). This proved to me I required some mystery involved in plotting my stories. So now I write very minimal notes and type what comes to mind. I believe some plotting is good to keep the flow of your story and to keep your readers interested.

Kaye: What is the one thing in your writing career that is the most unusual or unique thing you’ve done so far?

Ashley: Um….how about try ‘too hard’? If that’s a thing? I used to get up in the early hours of dawn to type a page or two before going to college or going to work. I also used to trial so many different methods of plotting and note taking it drove me insane! So I settled for what currently works and blocked out a reasonable amount of time during the day to type.

Ashley: Currently, I don’t have a blog. I only have a website where you can find a buy link to my book Demon Anarchy along with my contact information and monthly author interviews I post to help authors succeed at reaching out to their audiences.

Kaye: What was the most fun interview you’ve ever done? Why?

Ashley: I’ve only completed a few author interviews so far, I think all of them are fun to do in a way.

Kaye: Would you like to tell us a little about Demon Anarchy?

Ashley: Would I ever! It’s not only a page flipper flooded with action including explosive weaponry, but also combined with entrancing romantic encounters and a twisted plot line. It opens to New York City, the big apple, where the reader discovers demons lurching in the shadows of the city living off the blood of humans. Only agents know of their existence, the rest are left blind to the war about to appear within the allies and streets.

Time isn’t on their side when the agents discover the leader of the demons appear and wreak havoc among the city by rallying the numbers, creating Demon Anarchy.

Kaye: If Demon Anarchy was made into a film, who would you like to play the lead?

Ashley: I keep jumping between two main characters. Alice, an agent trained to kill demons, and Damien a half demon who feels trapped between the human the demon world. Damien would be my first choice, Mr. Bad Apple and won’t take a no for an answer, however Alice whose stubborn and strong willed personality takes a close second. I would cast Milla Jovovich as Alice, and Christian Bale as Damien.

Kaye: It seems that you travel quite a bit. Have any of the places you’ve traveled ended up in your books? Which ones?

Ashley: I love to travel, which is why I’ve traveled different parts of the world with my husband. Yes, I’ve traveled to New York City which is the setting for my story Demon Anarchy as portrayed with descriptions of alleyways during rainy nights and the busy crowded streets filled with people during the day. I always thought the big apple would be the perfect location for demons lurking in the shadows.

Kaye: What is the strangest inspiration for a story you’ve ever had?

Ashley: Not sure….there has been so many random moments where all I have to do is listen to the right music or see something that sparks my imagination and my thoughts go wild.

Kaye: What can you tell us about what’s in store for your readers? Any WIPs you’d like talk about?

Ashley: I’m currently 22 weeks pregnant and am due in November, so my writing has slowed down a bit. But I’m still hammering away at the first book of a trilogy consisting of young women who revolutionize their kingdom in the early 1800’s. The book I’m currently typing is about a young woman who fights against the world of men to become the first female professor in her kingdom by entering the king’s challenge, a challenge of the mind proven to pluck out the smartest individual in Cirus whose worthy enough to tutor the future heir to the throne. However within time the plot could change a little depending on my mood/interest, but this is the strongest plot I’m currently focusing a lot of my time and effort on.

Kaye: Describe yourself in three words.

Kaye: Your introduction on your Facebook page says, “Multi-tasking is my talent”. Besides writing, what are your other talents?

I want to thank Ashley Scottt for joining us today. I hope you had as much fun answering the questions as I did asking them. For those of you who would like to learn more about Ashley Scott and her writing, you can drop by any of the links below.
Links:
Author Website: www.authorashleylscott.wordpress.com
Facebook: https://www.facebook.com/ashley.scott.author
Twitter: https://twitter.com/authorashscott
Amazon Author Website: https://www.amazon.com/default/e/B01M0KUCO5/ref=dp_byline_cont_ebooks_1?redirectedFromKindleDbs=true
Book Buy Link: https://www.amazon.com/Demon-Anarchy-Ashley-Scott-ebook/dp/B01LXLWA6I/ref=sr_1_1?ie=UTF8&qid=1531256826&sr=8-1&keywords=Demon+Anarchy
Google+ : https://plus.google.com/u/1/115295645549324942619

If you’re an author and you’d like to be interviewed on Writing to be Read, email Kaye at kayebooth(at)yahoo(dot)com and put Interview Request in the subject line.