July: On the hunt for crime fiction 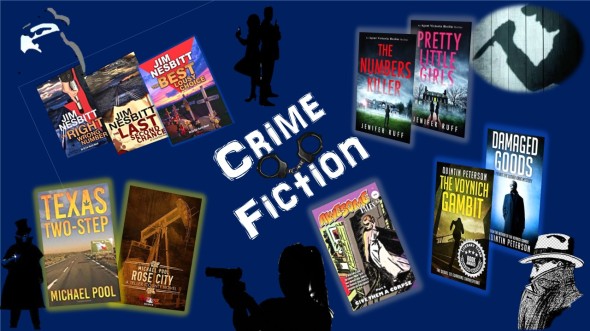 The crime fiction genre covers a lot of ground. By definition, crime fiction involves mystery to be solved, usually who the killer is, or a quest to figure out some type of diabolical plot. Crime fiction stories involve pretty high stakes, and therefore a lot of suspense. Often there is a ticking clock to ratchet the tension even higher. And of course, there is always a crime of some sort to be solved, or prevented; some sort of wrong to be righted.

Crime fiction is a broad term which includes many sub-genres, which focus on the investigation of a crime and the apprehension of a suspect, either by law enforcement agents, as in The Numbers Killer, by my “Chatting with the Pros” author guest, Jenifer Ruff or by a tough guy P.I., as in hardboiled crime fiction such as Jim Nesbitt writes, with his tough guy P.I., Ed Earl Burch in The Best Lousy Choice and the two previous books in that series.

Hardboiled heroes are memorable. Who doesn’t know of Sam Spade or Mike Hammer and their cynical tough-guy images?  They are usually down on their luck, or at least between clients. They are often heavily flawed, often self-destructive, but a ladies man none-the-less, with a love them and leave them attitude and the snappy dialog of the 1920’s. Hardboiled fiction was birthed by Carrolle John Daly and Dashielle Hammett in the 20’s, and carried on by authors such as Raymond Chandler and Mickey Spillane.

In noir crime fiction, the protagonist is usually an extremely flawed, average guy. He’s usually down and out, or perhaps on a downward spiral in a situation that seems bleak and hopeless. He’s a self-destructive hero, who ends up going against all odds to fight corruption and injustice, not because it is his job, but for strictly personal motivations, which are usually not in his own best interests. An excellent example of this is found in Rose City, by Michael Pool (See my interview with Michael next Monday, the 29th).

And of course, the classic crime fiction is pulp, such as Quintin Peterson writes in Awesome Tales #10 . From pulp, we get our classic heroes and fiendish evil villains. It’s from pulp that comic book super heroes and super villains arose, which is yet, another sub-genre of crime fiction, which has expanded with a life of its own to super colossal proportions.

We went on a hunt for crime fiction, and we found quite a bit. I learned a lot and I hope you did to. Now, I’m looking forward to August in a quest for mysteries and mystery authors. My “Chatting with the Pros” guest will be New York Times bestselling author, Gilly Macmillan. I’ll also be interviewing mystery author Gerald Darnell. And I’ll be reviewing a mystery anthology, Death Among Us, as well as a search and rescue mystery, Murder on the Horizon, by M.L. Rowland, and a paranormal cozy, Broomsticks and Burials, by Lilly Webb. I hope you’ll join me.

Double the mystery, double the suspense with “Double Blind”

Double Blind, by Dan Alatorre is a riveting suspense thriller that will keep the pages turning. I didn’t want to put it down. I was forced to stop in the middle of a climactic scene because I couldn’t hold my eyes open any longer and my brain was muddling the words. But, I was back at it first thing the next morning because I had to find out what happened. And you will, too.

There’s a brutal serial killer on the loose, but when he strikes two members of the same family on the same night, it sends police looking for connections that don’t seem to be there, and the killer seems to always be one step ahead, and brings in Johnny Tyree, a P.I. and friend of the family right into the thick of things. When the two detectives working the case, Carly Sanderson and Sergio Martin, become the targets, it sends police reeling in yet another direction.

Dan Alatorre does a marvelous job of weaving the subplots together without revealing the surprise twist at the end in this well-crafted crime novel. I give Double Blind five quills.