“A Warm Winter Skye”: A Christmas Novella that touches the heart

A Warm Winter Skye, by J.C. Wing is a Christmas novella in Wing’s Gannon Family series. Even if you haven’t read the previous books in the series, this story is easy to follow and you feel as if you almost know the characters. I’m not sure why it is labeled as a Christmas Novella, other than the fact that the story takes place in the months preceeding Christmas.

I had trouble as I went to write this review, because I wasn’t sure what to say. It’s a good story. The problem might be what I said about ‘almost’ knowing the characters. This could have been a novel, instead of a novella. Wing could have gone into more depth, allowing us to know more about them. Perhaps if I had read the preceeding stories in the series, I wouldn’t have been left feeling as if there should be more.

It really is a good story. One that will make readers fret over the possible outcomes and remind them of the power of love and family.  The characters need to be more fully developed, and the Irish dialect is too heavy and hard to understand, but I still wanted to read to the end. I give A Warm Winter Skye three quills.

“Twisted Webs” may leave readers tied up in knots

Twisted Webs, by Darlene Quinn has more twists and turns than a lab rat maze. The story moves along at a quick pace, with brief chapters that keep the pages turning and maintains interest over an eight year period of storyline. Even though the setting revolves around the worlds of high fashion and finance, the characters were easy to identify with and I found myself rooting for good guys and bad guys alike. After all, they are all just flawed humans, no matter their intentions. This story deals with many issues that are prevalent in the world today. It is a tale of finding lost children, lost mothers and lost inner-selves.

This story pulled me in and didn’t let go until the last page. More importantly, the plot and characters stayed with me long after I put the book down. I give Twisted Webs five quills.

Freedom’s Song, by A.K. Lawrence has all the elements of a good romance wrapped up in the plot of a top notch thriller. It is obvious that this is book 2 of the continuing saga of Baldwin series, (novels set in the small town setting of Baldwin, Michigan), but Lawrence offers just enough background to keep me from being in the dark on the first one, without actually reading it, yet doesn’t bog you down with backstory. The characters feel realistic enough to make me care about what happens next, and that’s a good thing.

Hunter and Anna found each other last summer, during the life or death events in the first book, when he became the knight in shining armor for both Anna, who was kidnapped and Nancy, who was married to Anna’s kidnapper, an all-around louse of a guy, named Dock. Now Nancy’s divorce is almost final, and Colby has plans to make his move for Nancy once she is a free agent once more. But, all is not as it seems and a blast from his puts the brakes on his anticipated romance, when his college stalker girlfriend reappears on the scene to claim her man.

The only complaint I had with this story was I felt the dwarf subplot and the proposal pool were left unresolved, and we really didn’t get to see them through to the end. If you read the book, you’ll see what I mean. The romantic elements carry the story as we get to know the characters and sets things up, but when the thriller elements join the party things start hopping with good tension and suspense. I give Freedom’s Song five quills.

Gyre, by Jessica Gunn is the first book in her Atlas Link series. It is the story of Chelsea, a descendent of Atlantis, who is just discovering her amazing powers and Trevor, a Lemurian descendent, who should be her mortal enemy, but instead falls for her in a big way. See? Boy meets girl, but there is no way they can be together, yet they will fight against all the odds, and even against family to prove them all wrong. Now if that isn’t the recipe for a perfect romance, I don’t know what is. As they are traveling aboard a top secret naval submarine complete with cloak, I think Gunn has the science fiction elements and Lemurians and Atlanteans with super powers pretty much covers the fantasy realm. If it sounds confusing, read the book. It’s actually a pretty good genre combination.

Chelsea is discovering her powers. First super strength, which she was able to ignore, or deny, but now she keeps teleporting to a location near Trevor any time she gets stressed. The problem is, Trevor is on a top secret U.S. Naval Sub cruising the ocean depths, but on that vessel also may lie the answers to Chelsea’s unasked questions about who she is really and she might learn to control her newfound powers. Unlike Chelsea, Trevor is aware of his heritage as a Lemurian, but he refuses to get involved in the war his people are wageing with the Atlanteans. He just can’t believe the girl he’s falling for is his innate enemy, and he’s able to keep it all under control until they find an Atlantean outpost filled with valuable artifacts on the ocean floor. It seems everybody wants those artifacts for their own reasons, and we can only guess who will get them, and where Chelsea will end up.

This story is well-written, with minimal telling of the tale. The characters are likeable, except for Trevor’s friend and fellow Lemurian, Valerie, who is a bit difficult to figure out, but I think that’s done on purpose to throw readers off the trail. I give Gyre four quills.

“A Cat Came Back”: an unusual tale of transformation

A Cat Came Back, by Simone Martel is a quirky little tale about a woman who finds herself in the body of a cat. Most of us, put in the same position, would panic and try to figure a way to get our own body back, but not Eliza. She accepts what has happened as a a matter of course. All she wants is for someone to see her for who she really is, and at first, it seems that being in this cat body might not be such a bad thing, since her boyfriend, Stu, takes one look at the cat and knows she’s in there. But, being recognized for who you are isn’t always easy, you have to keep working at it, especially when the only sounds that come out of your mouth are purrs, yowls and hisses.

A thoroughly entertaining story of transformation that offers a few surprises and the occasional chuckle. It’s light and quirky and funny. Not your typical body switching out of the bottle tale. I give A Cat Came Back four quills.

“Blood in the Water”: A Crazy Crime Novel

Author Tim Baker has done it again and Flagler Beach is the setting for another crazy crime caper, Blood in the Water. Ike helps a friend with a seach for sunken treasure that leads to a thirty year old cold case, which strangely enough is tied to a murder investigation his girlfriend, Val, has undertaken. Can they bring done the killer and solve the cold case before he learns they are on his trail and puts a stop to their plans? No spoilers here. You’ll have to read the book to find out.

As usual, Tim Baker has turned out a fun and extremely entertaining read. Readers will root for the good guys and boo whenever the villian appears. Hidden identities, missing persons, sunken treasure and lots of danger. This book has it all.

I give Blood in the Water five quills.

Leaving Eva/Losing Eva: A story of loss and seperation 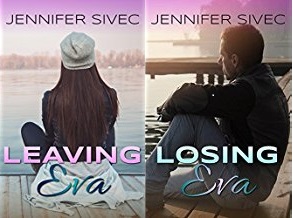 Leaving Eva and its sequel Losing Eva, by Jennifer Sivec, are a sad and tragic tale that evokes strong emotional response in the telling. This touching story may be true to life, covering the lives of not one, but several dysfunctional generations of women and the men in their lives, over the course of time. It is a tale where one tragic action by one self-centered girl dominoes into many heart-wrenching losses in a saga where nobody wins. While each book easily stands alone, together they tell a story of loss and tragedy that will bring all but those with hearts of stone to their knees. There is so much heartbreak within these two stories that they left me longing for a sequel, one titled Loving Eva, where at least one woman of the Harper family might finally find happiness.

One spoiled rich girl, Ellie, and a series of poor choices, leads to a life of abuse and neglect for her daughter, Eva, whom she abandons at a very young age. Losing Eva is the story of that young girl’s life, spent searching for love that seems to be just beyond her grasp. Losing Eva is the story of how once found, she constantly struggles to keep that love, and how it always seems to slip through her fingers. In addition, these books tell the story of all the others who are effected, both directly and indirectly, by Ellie’s initial decisions and the lessons, both learned and missed, from them.

This is a story you won’t want to put down. Sivec’s characters are well developed and she  makes you care about them. You will  hope for positive life experiences for them and root for them when they succeed, especially for the main character, Brynn. The plot is full of surprises and rivets you to your seat to find out what will happen next.

My only problem is the head hopping. In places it gets to be so bad that I had to stop and go back to figure out who’s POV I was in. At times the viewpoint changed mid-paragraph, which really made me have to stop and reread. Regardless of the recurring confusions that this caused, and the fact that it is one of my biggest pet peeves, this story was so powerfully told that it brought me to tears on more than one occasion. The Harper generational saga is woven like an intricate narative tapestry through the lifetime of one hauntingly tragic Harper woman.

Grab a box of tissue when you settle in to read Leaving Eva and Losing Eva. I give this story set four quills.