A Roundup of Westerns in May 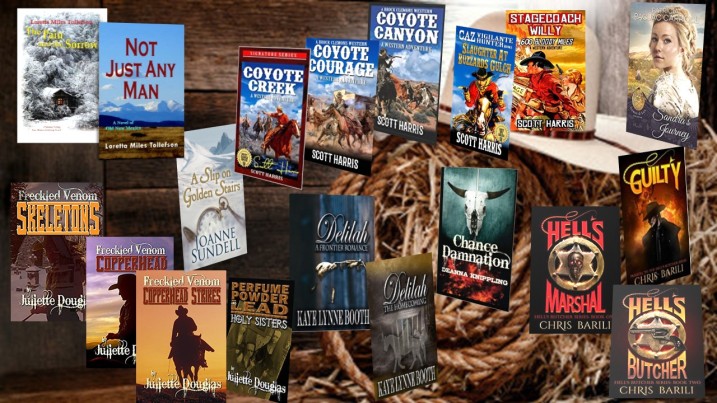 When I began seeking my M.F.A. in Creative Writing, back in 2012, I would have said that the western was a dying breed. Even as I tried my hand at writing a western novel, with Delilah, I didn’t think the book would get very far. I figured publishers didn’t want to put out westerns anymore, because they were looking for books that would sell. I thought the only readers westerns had were old men who’d grown up on Louis L’Amour and Zane Grey. I didn’t believe there was an audience for western any longer.

Today, I have to say that I was wrong, since there seem to be new western authors popping up all the time and a good portion of them are female. In fact, the genre seems to be expanding, rather than dying out. I’ve made the acquaintence of several who I did not previously know as a result of my research for this month’s genre theme. That first assignment eventually grew into the first book I was able to get published, but when I began to write Delilah, I looked at westerns as a male realm where a female author might find difficulty being accepted. Now, I’m seeing a lot more female authors of the genre than was previously the case and I am pleasantly surprised.

For a look at a new twist on classic historic western fiction, you can check out my review of Not Just Any Man, by Loretta Miles Tollefson. Like all good things, the western genre has had to change with the times to survive. Many authors are finding a selling point by combining western with other more popular genres, like romance. If you look, you’ll find that a good portion of today’s westerns fall into the category of western romance, although romance isn’t the only genre authors have combined with western. I’ve read a few paranormal westerns, as well. For an example, you can read my review of Joanne Sundell’s, A Slip on Golden Stairs. There are even a few science fiction westerns out there, as well as western dark fantasy, such as Chance Damnation, by DeAnna Knippling, which I reviewed earlier in the month, or check out my 2016 review of Chris Barili’s Hell’s Butcher series, which both feature supernatural elements.

I’d also venture to say that the number of westerns featuring tough female protagonists would tip the scales if measured against those featuring male heros in today’s westerns. It seems the cowgirl is determined to take her place in history, even though old cowboys never really die. But, all western heroines are not cowgirls. Western heroines may take the form of pioneer women tough enough to brave the western frontier and win, or a homesteading wife who loses her husband to one of the many threats that come with living in a harsh landscape and must survive in a brutal landsacpe and fend for herself, or prostitutes who lived lives of servitude and put up with indignities not spoken about in polite company in order to survive an isolated existence, or young girls full of dreams to see the world who are looking to escape and determined to do whatever it takes to achieve them. They aren’t all Calamity Jane, but they are each tough and bold and gritty in their own ways.

But don’t take my word for it. Maybe the western genre hasn’t changed as much as I think. You can find out what other western authors think by checking out this month’s interviews. My “Chatting with the Pros” author guest was western adventure author Scott Harris, and I also interviewed Christian western romance author Patricia PacJac Carroll, and western author Juliette Douglas. And if you’re interested in further discovery, you can check out my January interview with western author Loretta Miles Tollefson.

As for myself, I’m working on the rewrite of the first 45,000 pages in the second book in my frontier western saga, Delilah: The Homecoming. I know you’re not supposed to edit until you’ve finished the first draft, but that’s what happens sometimes. Your character walks up and smacks you and says, “Where the heck are you taking me?”, and you realize the story has taken a wrong turn somewhere along the way. But I’m getting her back on track now. While Lois L’Amour is the reason I love reading westerns, Delilah and the other colorful characters featured in these books are the reason that I love writing them.

It’s been a great western round-up and I hope you’ll all join me in June, when will be riding the thriller train and looking at ways to give readers the thrills and chills they crave. My “Chatting with the Pros” author guest will be thriller author John Nicholls, and I’ll be interviewing author Dan Alatorre and reviewing his new thriller, “The Gamma Sequence”. My second thriller review is yet to be determined, so it will be a surprise. I hope you’ll drop in and see what’s in store.